Home with the Flu today I couldn’t resist going outside to photograph the hive of activity around the lavender bush in our herb garden. Such nice warm sun and fresh air, and some fun photography.

See my page about this comet for commentary of the video contents.

Check out the amazing sunrise this morning! Photographs taken from the hills of Perth, Western Australia and including the “Golden Pipeline” bathed in the morning colours.

I enjoyed a walk around some forest in Glen Forrest / Helena Valley this afternoon with my new lens. Great to be out and about in the bush with camera gear, in daylight! My ankle held up well too which is good.

I should start by clarifying that overall I prefer Canon lenses to 3rd party equivalents and given the spare cash would probably buy a Canon L lens without giving much consideration to the alternatives. It hasn’t always been this way, in my early days of SLR (film) photography I used Tamron components. In this case I have gone with the Tamron after much research and weighing up the comparison with the equivalent Canon 24-70 F/2.8 II. The decision to go with the Tamron came down to: Price ($1099 vs $2345), Image Stabilisation (which the Canon does not have), and that by most accounts the image quality of the Tamron is very good (I won’t go in to details – you can find the reviews online easily yourself). I am also sometimes wary that the marketing machine of Canon can blind us from equivalent cheaper alternatives. As alluded to above, if I were making enough money from photography to pay back the significant cost of the Canon lens in a reasonable time I probably would have just gone with the Canon at the loss of image stabilisation. But, I am just a pro-am doing this photography on the side outside my day-job so can’t always justify paying for premium pro gear.

So far I’m very happy with the Tamron 24-70 f/2.8 VC and feel it is worth giving credit where credit due. I will comment specifically on the vignetting.

The Tamron seems nice and sharp, has about the same edge distortion as my 17-40mm, and actually has significantly less vignetting than the Canon 17-40mm throughout the overlapping zoom ranges. The Canon still has the advantage of camera-applied lens correction which effectively applies a flat frame to the canon lenses, significantly improving the result of the Canon. The same correction can be applied to the Tamron via software. I have done the correction using flat frames, something done all the time for telescope based astrophotography and which is dead easy to do through Photoshop but if you have Adobe Lightroom I see that the correction can be applied to RAW files there by choosing the Tamron lens from a drop-down (easy!).

The advantage Canon has given their lenses must frustrate manufacturers such as Tamron as the only reason Canon would not allow non-canon lens profiles in their cameras would be a marketing one. Technically there is no reason Tamron could not provide a lens profile for upload in to a canon camera, if only it were permitted. Or even letting the user take in-camera flat frames would do.

Look at the vignetting comparison of the two lenses:

So, if you are considering this lens I would suggest the vignetting should not be a factor in your decision. Remember back in film days both lenses would have appeared as per above.

This is a wide panoramic taken at Mundaring Weir. The panoramic contains three frames. It’s one of my better recent astrophotography results I think. Read more at my Astro Photography Australia site. 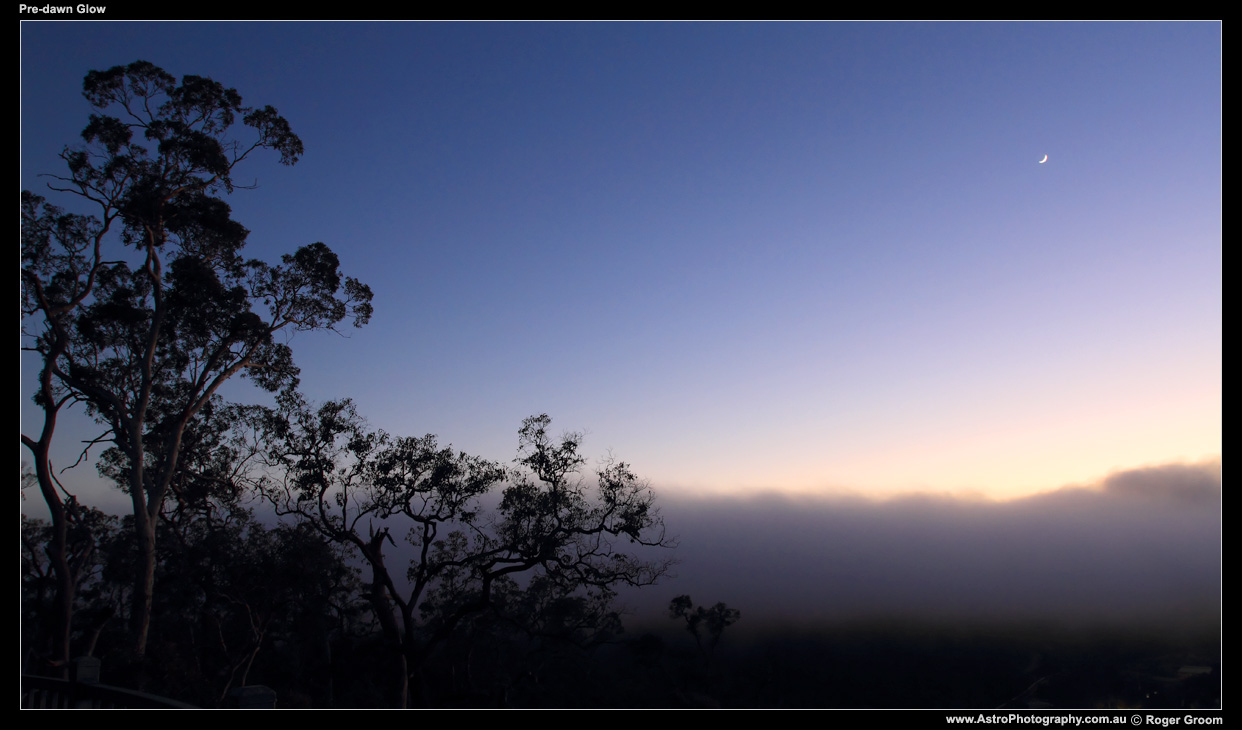 I absolutely love this photo from the lookout over Mundaring Weir (looking over Helena Valley. I just love the layer of fog, with the soft glow of pre-dawn light on the trunks of the trees, with the crescent moon and the beautiful soft blue tones. Buy astrophotography such as this here.

Check out my latest star trail shot, with reflections in Lake Leschenaultia at my Astro Photography Australia store.